I've done 20 books for children and teenagers, so I've had many people ask me how I get ideas. Like most writers, I write about things I know or things I want to learn more about. For example, I've always been fascinated with animals and wondered what they would say if they could talk. To find out, I went to graduate school to study animal behavior. As part of this program, I spent four summers in Arizona studying the way lizards communicate with each other. After I finished, writing books like Animal Talk and Lizards came naturally.

Other books developed very differently. I had lived in New York City for many years before I learned that there was an Native American reservation not far from me on Long Island. I soon discovered that most of the people I knew were also unaware that there was a Native American nation living at their doorstep. I wondered what it was like to be a teenager trying to maintain an identity as a Native person while living in one of the biggest metropolitan areas in the country, especially when no one else seemed to realize that you exist. So, I decided to ask. The result was Soaring Spirits: Conversations with Native American Teens.

As you can probably tell from many of my books, I really enjoy talking with teenagers. In addition to Soaring Spirits, others -- such as Where Are My Birth Parents?, Teenagers Face to Face with Cancer, and Teenagers Face to Face with Bereavement -- came about because I thought the kids interviewed for these books had important things to say about some very difficult issues.

Sometimes, it can be more fun to write a book with someone else than to do it alone. I've been lucky in being able to write books with a number of my friends, as well as my niece. In some cases, they were the ones to come up with the idea. For example, Leslie Peterson -- who had an adolescent son at the time and had been a teenage mother herself -- wanted to know what the experience of teen parenthood was like from a guy's perspective. I liked this idea too, so we interviewed young fathers and wrote Teenage Fathers together.

Finally, many of my ideas have come from just looking around me. I've written stories inspired by the stone animals on brownstone buildings, the iron fences in my neighborhood, and my dogs. I've found that good ideas are everywhere, if I pay attention.

Karen Gravelle lives with her two miniature dachshunds on the Eastern Shore of Virginia. She holds a Masters degree in social work and a PhD in biopsychology. 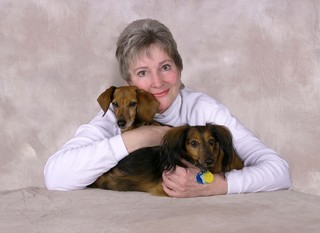